UPDATE: Please read this official press release for full amount of information about the game. THE NEW LOGO! – Concept is “world-driven” – The world will end in 13 days – Lightning’s customization will have a big role – Players will be able to experience actions that are […] 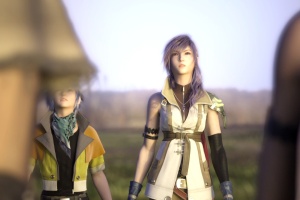 UPDATE: Lightning event will start 11.30JST in Japanese time. Check out how much clock is there at the moment from here. We have been talking about upcoming Lightning Saga: New Developments Presentation for few weeks now. Well, the announcement is happening today or tomorrow (depends on your timezone) […]

THE MASSIVE STORM IS  COMING! PREPARE YOURSELVES! Square Enix has opened an official twitter user for next title of Lightning saga which will be announced on September 1. This new Twitter user is called “Lightning’s Room” and producer, Yoshinori Kitase tweeted there: “Hello, it is FFXIII producer Kitase. This Twitter account is something that has been prepared […] 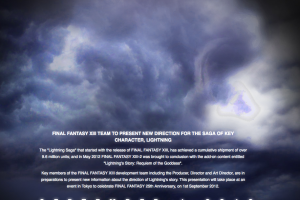 A Storm Gathers! The official site of the next Final Fantasy XIII game opened!

Square Enix has opened a new site for new Lightning saga game! Final Fantasy XIII: A Storm Gathers? Final Fantasy XIII-3? SOMETHING ELSE? Click the text below to visit the site! FINAL FANTASY XIII TEAM TO PRESENT NEW DIRECTION FOR THE SAGA OF KEY CHARACTER, LIGHTNING The “Lightning […]