Drakengard 3 will be released for PlayStation 3 on 20th May in North America and 21st May in Europe. Today, we are taking a closer look at each main character of the game and revealing a few details about them.

A gifted Intoner with superhuman battle skills and expert swordsmanship. She is open and uninhibited with men, yet violent and lazy by nature. She constantly quarrels with her overly serious sister, One. The flower blooming in her right eye prolongs her life and has given her a unique body.

A fellow Intoner and Zero’s younger sister. She is intelligent, serious, and has a strong sense of justice—Zero’s polar opposite. It is out of her intelligence that she comes to question how the Intoners came into existence and why they possess such godly powers. She decided to overthrow the despotic rulers of the world who had oppressed the people and created a new peaceful world. She reigns over all the Intoners.

The ruler of the Land of Sands and third Intoner sister. Her bright and cheerful personality allows her to befriend anyone, and she sets the tone for the Intoners. She is in love with a man and openly displays her affection for him regardless of the settings or situation, much to the annoyance of those around her.

The fourth of the sister Intoners, she rules over the Land of Forests and has a fan following amongst some of the soldiers under her command. Lazy and apathetic, she hardly cares for things not striking her interests, but shows obsessive tendencies towards anything of interest. She is innocent, yet stubborn and shows no interest in Zero whatsoever.

The fifth Intoner sister and ruler of the Land of Mountains. She is very straight-laced and listens carefully to what others have to say. But her superior air masks a distorted inferiority complex. Her sexual desires match those of her sisters, but her uptight personality prohibits her from acting on those desires. She is the only virgin among the Intoners.

The youngest Intoner and ruler of the Land of Seas. Extremely confident and greedy, she desires all that she sees, but quickly loses interest once she gets it. She purposefully uses risqué language during conversations and loves alluding to her nightly escapades. Her seemingly endless greed goes so far as to lust after her sister, Zero.

A member of the proud dragon race who travels alongside Zero. A supreme idealist, he thinks conflicts can be solved by words alone. But his idealistic talk annoys Zero to no ends, although he remains oblivious. He is amazingly powerful thanks to his dragon lineage, and has used his great powers to save Zero on more than one occasion. “Mikhail” is merely his current name, while he had another name prior to his reincarnation. 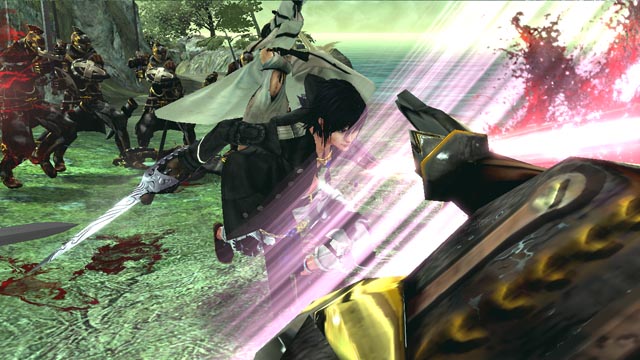 CENT
A narcissistic disciple who fights with twin swords. Though he possesses supreme confidence, he’s actually quite dumb. Every bit of trivia he reveals is wrong, and his mistaken information constantly annoys his companions.

An old-looking disciple who fights with special ring weapons, known as chakrams. Despite his appearance, he has a whimsical air about him and boasts a seemingly insatiable sexual desire. It is said that his pride and joy is the longest of all the disciples and he’s fine so long as there’s a hole nearby.

A well-muscled disciple who fights with his fists. He is well-mannered and a perfect gentleman around women and appears to be the most normal of the disciples. However, he is an extreme masochist who perceives any torment or adversity as a reward. He’s tried to conceal his masochistic tendencies, but everyone is well aware of his true colors.

You can read Drakengard 3 novella, and download wallpapers and icons from here.