Feeling unmotivated and hoping that it would be weekend already? Let these new Final Fantasy XV demo screenshots motivate your Monday and remind you that it’s less than a month left before you will be able to play the game for the first time ever! We are soon sharing more details from the latest Active Time Report and below you can find a recap of the key details about the upcoming demo, titled as Final Fantasy XV: Episode Duscae. It will be playable on day one when Final Fantasy Type-0 HD launches on March 17th in North America,  March 19th in Japan and March 20th in Europe.

Hajime Tabata is well aware of the risks that come with the demo release, but he is ready to take them in order to make Final Fantasy XV the best experience as possible. This is why certain things are adjusted for the demo. The development team first planned to make the car be available to drive, but they didn’t want people to be mistaken and think that Final Fantasy has become a driving game. The director also stressed that instead of that, they are planning to “take things down a notch” and focus more on the character and exploration in the game’s seamless world. He also added that there will be “extreme improvement and evolvement” in Final Fantasy XV and they want to show new updates for the fans one step a time to avoid making too big changes too suddenly.

Another things changing are the graphics. They won’t be fully optimized for the demo because it runs on Luminous Engine 1.5 when the final version of the game will be using Luminous Engine 2. That’s why it’s important to see the demo as “a single player beta” because the game will be evolving graphically and mechanically from it. Talking more about the graphics: there will be around five million polygons per frame and each character takes roughly 100 000 polygons where hair is using 20 000 of them. These numbers don’t really tell much, but Tabata has explained it’s around five times more than in the previous generation. In Final Fantasy XV, the characters will have more realistic and smoother animations as well – thanks to over 600 bones the character models have. It’s almost twelve times more than what you could see in Square Enix’s last generation games. Alongside polygons and bones, they are working to improve the texture capacity.

There’s still much we don’t know about Final Fantasy XV’s battle system, but Hajime Tabata will be explaining and showing, how it works during the fourth Active Time Report. First and foremost, he wants to create a hardcore battle system that’s also accessible for the newcomers. This means that the novices and the experts will be separated from each other with certain key mechanics such as parrying that demands strict timing. The basic idea is to build the battles upon a continuous flow of movements; this continuous flow is based on the combination of buttons you press and each action is chained into another in a seamless way. There will be two stances: defensive and offensive. To evade the incoming attacks, the player must enter into “the defense stance” which also consumes magic points. The fighting itself happens in the offensive stance.

Unlike in any other mainline Final Fantasy game, there won’t be a separated menu for the commands. You will be controlling other characters by adjusting their battle styles and strategies such as the placement during the fights from the menu. Planning how you will approach enemies may offer you a chance to do a preemptive strike when you learn their viewing angles. Cooperation between the characters is a major element in Final Fantasy XV. Most of the coop commands will be executed automatically, but certain abilities, equipment and weapons may encourage the characters to cooperate more likely when the circumstances are right. 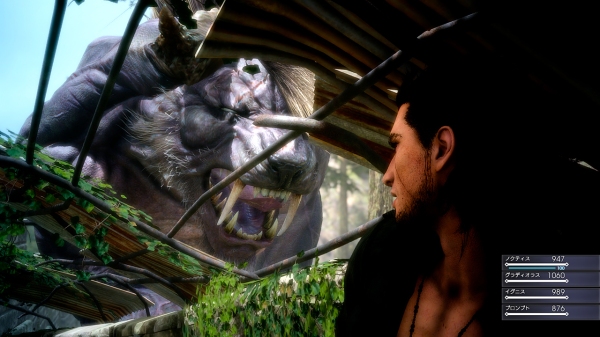 In the latest trailer, we could get a glimpse of Noctis and others following a Behemoth in the forest. It turns out that this operation is part of a hunting mission, which will be included in the demo. By completing these bounties, the player will be rewarded with money, for example. Finding the behemoth will be a mission on its own and your party members will be searching for clues as you explore the area.

Communicating with you party members is also essential because they may find clues to track down the mighty beast. When you finally find the behemoth, be ready to fight! – But don’t get overly confident or cocky even though the Behemoth has lost its other horn and is half-blind because he is one extremely powerful and angry individuality, making it a real threat to the cast if they get hit by its attacks. If Noctis gets knocked out, it won’t be a game over since Gladiolus, Prompto or Ignis may run to help him to get up, as seen in the earlier trailers. More specific details will be included in our upcoming ATB4 article.

Like in the previous Final Fantasy games, eidolons are playing a big part in the experience. The development team first planned to include the Titan eidolon in the demo, but since he got deeply involved into the story, they had to cut him away and replace with other eidolons. To acquire an eidolon, you have to beat it at first and after that only Noctis will be able to summon it in the battlefield. Even though the size of eidolons and certain monsters can be enormous, the fights won’t differ that much from the basic enemies. However, the boss fights tend to have special cooperative attacks and events.

Many monsters are inspired by Yoshitaka Amano‘s original monster designs which were created for the first Final Fantasy games. The wildlife is usually very calm and they will likely ignore you when you run past them, but if you come too close they will attack you like real animals. Sometimes you will even collide with the enemy patrols who are scouting the areas by armored cars, airships – even magitek like mechas. Since Final Fantasy XV also features a dynamic day-night cycle system, it will also affect to monsters behavior and the most powerful beasts come out during the nights.

Final Fantasy XV also has a dynamic weather system. This means that the weather will change naturally and the environment and objects will react to the conditions accordingly. For example, when it is raining, the characters will get wet and puddles will appear on the ground. When it’s shining, the ground and the characters’ clothes will be dried by the sun. In addition, the weather will impact to Noctis‘ magic abilities. During the sunny days, fire magic will deal more damage and may even cause burning to the environment. At the worst scenario, Noctis himself will get hurt by his own magic attacks, if they are used in the wrong conditions.

The day-night cycle system was first revealed during “The Overture” presentation. One day in the game equals to 60 minutes in the real world, and the player can see the lighting and the shadows dynamically changing as the day goes on. The towns will be reacting to the nights as well, and people will turn their home’s lighting on when it’s getting dark. 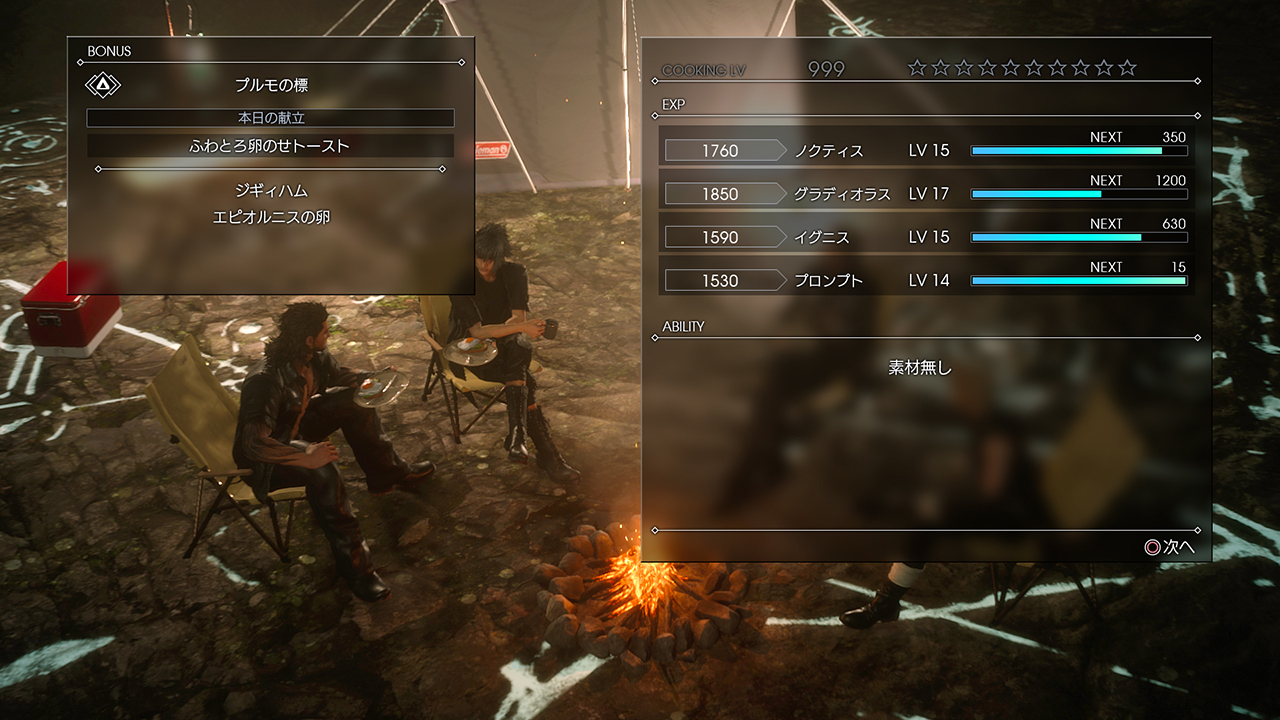 During the days, your party will gather experience points from completing missions and killing monsters, but they won’t be immediately added to characters’ levels. To level up, you have to camp and rest at first. By camping the cast becomes weaker and won’t perform well in the battles. If you really want to stay up all day along, the limit will be about three days in a row and by then the party will be too exhausted to continue. While camping you can also adjust weapons and accessories and enjoy delicious meals created from ingredients which can be acquire by killing innocent monsters, bought from stores or by completing mini games such as fishing. (Not confirmed for the demo yet) These foods will give the party different status buffs, where a greater cooking level increases the effect’s longevity.

Final Fantasy XV: Episode Duscae is scheduled for release on March 17 in North America, March 19 in Japan and March 20 in Europe. It’s exclusively bundled with Final Fantasy Type-0 HD First Print Edition, which can be recognized from the special cover. The Collector’s and FR4ME editions will be also contain a download voucher for the demo. Final Fantasy XV: Episode Duscae also supports dual audio, which means that the voice acting can be change Japanese or English as you prefer.