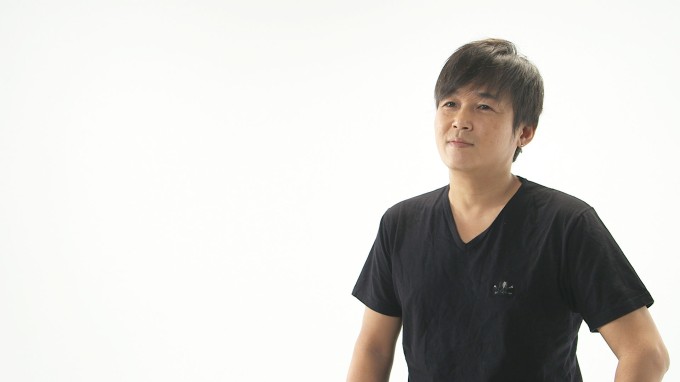 Director Tetsuya Nomura was recently reported to have left the Final Fantasy XV staff to focus on leading the work for Kingdom Hearts 3. This week’s Famitsu features him discussing about ongoing and possible future Kingdom Hearts projects. Many thanks to KH English for providing a full translation of the interview! Without further ado:

>an even more universal game with HD remastering

—Were there any parts you were particularly attentive to during production of KH2.5?

Mr Tetsuya Nomura (hereon Nomura): Due to size issues, in the KH 358/2 Days (hereon Days) cinematic work included in KH1.5 we left out combat and just went with text intermissions that explained, but many fans pointed out that it was a shame, and that weighed on me. As KH Re:coded didn’t have the volume of Days, we were able to follow-up on that part by creating cinematics for the battles and Disney world stories as well as adding some narration by Mickey. Mickey both opens and closes KH Re:coded, so he was the best choice for the narrator. Also, as KH Birth by Sleep (hereon BbS) was going from a handheld console to a non-portable one, we needed to adjust the controls and such. At first, we were also looking for a way to include the multiplayer section as it was. This wouldn’t have been too difficult if we were only working on BbS, but as we had three titles’ worth of work on our plates for KH2.5, we included it as reworked into a single player feature. 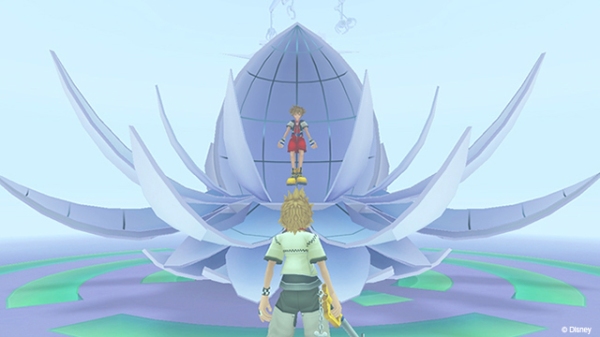 —What was it like to reexamine your own past work when producing KH1.5 and KH2.5?

Nomura: Replaying games made years ago often does let you feel their age, but I’ve never felt that way with KH games. I think perhaps the HD remastering has made them even more universal. Also, my impression from playing it after so long was, wow, I didn’t think there were so many specialised worlds in here. Perhaps that’s because they were easy to use game-wise when I included them. For Olympus Coliseum etc, we staff went along with our planning under the assumption that, while we still hadn’t decided on whether to include something, there might always be a KH3 (laughs). There’s also Sora’s growth as a character. In KH1 I was incredibly conscious of keeping things ‘Disney-like’, but as the titles have added layers I think an originality has appeared.

[Interview Bits and Bobs: Guest Characters | What are you careful with when it comes to guest characters? “On original worlds, that their outward appearance and personality is close to that of the original work, or I adapt them a little like with YRP. If they appear in Disney worlds, I match the aesthetic. I even made Zack’s waist thinner to match with that world.” (Nomura)]

—After your long involvement with the series, what do you think is the particular charm of Disney works?

Nomura: It is the extremely loving and careful way they show and handle their characters both inside and outside the works themselves. I think this is what makes Disney works top class worldwide. This is very important with games too, according to the type, and the whole thing can become good or bad depending on the way the characters are handled. I’ve learned a lot.

—Is that so. That’s rather deep. Can you please recommend any Disney works, or talk about any you’ve seen recently?

Nomura: I think I’ve spoken about this before, but I like The Lion King, that hasn’t changed. Recently, I was invited to the preview of Frozen, and I thought it was really good. Now that Pixar’s Mr Lasseter has also become the chief creative officer at Disney, I expect that from now on there will be even more works that are even more challenging. As a fan I am really looking forward to Big Hero 6 which premieres in December.

—Speaking of Frozen, there were reports that co-director Mr Tai Yasue made a statement regarding content with a point about ‘if Frozen were to appear in KH’.

Nomura: That surprised me too. I checked with Yasue, because we haven’t touched upon it at all, and there’s been no talk about what we’d do ‘if we put it in for now’. I do understand, though, because interviewers overseas do talk about their wishes for what they’d like to happen. In response, we Japanese don’t give clear yes or no answers. Then sometimes they take it as as ‘fact’.  It was misinformation that came from a difference in culture.

—So that’s what it was. Now, how do you actually choose new worlds?

Nomura: The shape it’s taking for KH3 is everyone sharing what sort of things we’d like to do on what sort of worlds, and then making decisions looking at that. A wide range of works fall within our targets so there are a lot of candidates, but we can’t make them all, and in the end we also need the OK from Disney. But, the staff working on KH3 are pushier than they’ve ever been (laughs). They get highly passionate on the spot, elaborating to me exactly why we ‘just have to do this!’, so it’s difficult to make choices.

[Interview Bits and Bobs: LINE Stickers | How did the KH LINE stickers come about? “Disney spoke to me, and then I chose the characters and lines myself. I love Vanitas’ ‘Tch’, but the one I use the most is Sora’s ‘OK’. I use it when responding to things I’m supervising with (laughs).” (Nomura)]

>The reason that enigmatic trailer was put out

—You used the opening section of KH3 in a recently released trailer for KH2.5, didn’t you. The conversation between those strangers was rather enigmatic.

Nomura: I had received so many responses after releasing that play video previously, and I could feel that people were eagerly anticipating KH3. I really wanted to put out some sort of message, even though I couldn’t show any content at that time. And, I wanted to show everyone that KH3 begins somewhere nobody is expecting, with speaking from new voice actors that haven’t appeared in the series before. I really enjoyed seeing everyone try to guess who those two are.

—We definitely were surprised. We hadn’t expected it to begin like that at all.

Nomura: I wanted to go with an introduction that wouldn’t make fans be like ‘yeah, we knew that’ upon seeing the opening section, and that would have both fans who knew the series and fans who didn’t be like ‘what’s this? What’s going to happen next?’ and start feeling anticipation. I do this every time, but I want to try and make things even for both fans and newcomers. By the way, the conversation between those two is actually a lot longer, it goes for over two minutes. When you hear their conversation, you’ll understand the flow of everything so far.

[Interview Bits and Bobs: Likelihood of a PS4 version | With the shift to the next gen consoles underway, especially overseas, would you say you want to release KH1.5 and KH2.5 on the Playstation 4 or the Xbox One? “Since we’ve only just finished work on KH2.5, we would need a little more time to look into the technical aspects of HD remastering for next gen consoles.” (Nomura)]

—The phrase ‘Lost Masters’ appeared in the conversation…

Nomura: That may not necessarily deserve capitalisation. It just means what it says, ‘Keyblade Masters who have been lost’ (laughs).

—Oh, is that so (laughs). We are very much looking forward to KH3, but there will be a bit of a wait to go after KH2.5 is released. In the meantime, are there any new developments for the series?

Nomura: Counting the developments in PC browser game KHχ (Key), I’d like to think that fans will spend the least amount of time possible separated from works from the series.

—We do wonder how KHχ (Key) will turn out. Among the scenes added to KH Re:coded, there is a ‘Tome of Prophecy’ episode which is related to KHχ (Key), isn’t there?

Nomura: The scenarios of KH3 and KHχ (Key) are intimately related, so they are being written at the same time. That’s why the plot of KHχ (Key) has been on pause for a little while, and I am very sorry, but I have to ask you to please wait a little longer. We are also currently investigating developments that would allow more people to experience KHχ (Key).

[Interview Bits and Bobs: First is Comic Con! | As Nomura said regarding Final Fantasy XV on page 18, ‘it’s up to the company. I can’t say any more than that right now’. We fans can hardly wait for KH3 and many many other in-progress projects to be made public. But first, let’s keep our eyes peeled at New York Comic Con!] 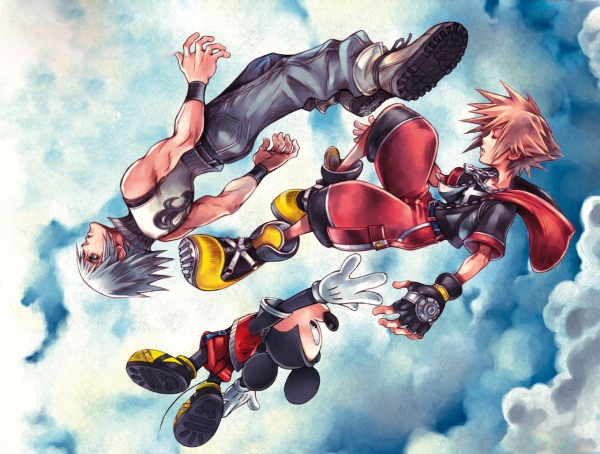 Nomura: Aside from KHχ (Key), which is currently still underway, KH3D is the only title in the series not remastered in HD. I personally don’t like leaving it as the odd one out, so I think it’s an issue that requires consideration.

>Sora’s mobility is too high!?

—So, what is the current stage of development for KH3?

Nomura: It’s moving steadily along the estimated schedule. However, we are having a lot of trouble with the image creating part of things due to the engine. While that’s going on, we are carrying out the scenario writing and world selecting. I’ve also drawn new clothes for Sora and Riku and the others.

Nomura: When I went to Osaka the other day and saw how development was coming along, Sora’s mobility was too high. He’d reached a level where just moving around would probably make him invincible (laughs). Of course, he can’t move like that from the beginning, but it looks like by the end he will be incredible. I’m looking forward to the next check. In a previous trailer Sora fought by transforming his Keyblade. The variations of those are also turning out to be amazing. It’s close to the way the original Keyblade wielders fought in BbS.

—We want to get our hands on it ASAP! Now, we’d like to ask about your work outside KH3. You said previously that various jobs have fallen into your lap.

Nomura: I do have many projects other than KH3. For some reason, with this timing, I have received many offers from both inside and outside the company, and I will be responding to those first. There are things that were given to me individually, and there are many things related to games, things outside games, and things that are yet to be announced. The closest thing is that at in October I am going to Comic Con which is being held in New York. While I have been given those jobs, I do intend to keep moving my own projects forward.

[In the next issue (on sale 2nd October) we will include a special feature commemorating the release! We will also continue Mr Nomura’s comments!]