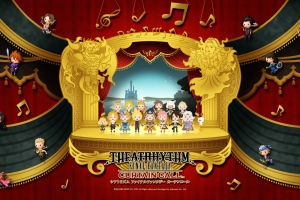 Theatrhythm Final Fantasy Curtain Call is due for release on September 16th in North America and September 19th in Europe. You can download the game’s demo through Nintendo’s eShop.

Anyone who plays Theatrhythm: Final Fantasy Curtain Call at PAX Prime 2014 (Square Enix’s Booth #3630) will receive a set of rare Final Fantasy Type-0 CollectaCards. These cards feature three of the main characters from Final Fantasy Type-0: Machina, Rem and Ace. Behind the cards, players can find an in-game […]

Step into the fray as Class Zero, a group of fourteen students from an elite military academy whose country is attacked by an aggressive neighboring empire. Featuring Ace, Machina, and Rem as playable characters and several pieces of the chorus-heavy original score to enjoy, players get their first […]

Though not directly connected, the FINAL FANTASY games taking place in the world of Ivalice are bound by common themes of political machinations, the regencies of kings and princesses, and those who would expose the dark truths beneath their thrones. Featuring a musical style befitting of their epic […]

Theatrhyhm Final Fantasy Curtain Call will be featuring a new game mode called “versus mode” which lets the players compete against each other locally or online through the Nintendo Network. The game is set to be release in Europe on 19th September. In North America, the game will […]

Each with their own distinct style and setting, FINAL FANTASY VIII, FINAL FANTASY IX, and FINAL FANTASY X showed just how dynamic and constantly evolving the series can be. Whether it’s Squall Leonhart’s unlikely heroism, the carefree Zidane Tribal and his merry band of thieves, or Yuna and […]