Updates about Final Fantasy Type-0 HD have come around again due to its surprise appearance (behind doors anyways) at PAX Prime a week ago. GameSpot spoke with the game’s director Hajime Tabata about its development, status, and a few little tidbits on what to expect from the title coming out in less than a year.

Hajime Tabata stated that localizing the original PSP version was withheld due to the shrinking of the PSP market, and that the outpouring support of fans sending their hopes of localization to the team had a strong impact.

“When we were considering the best time to proceed with the HD version, we had numerous conversations with overseas media and they mentioned that there was interest and demand. We were also hearing fans communicating their desire to play the game, and Operation Suzaku had communicated their hopes…so when we realized there was clear demand from the market, we felt we should really move forward with this project.”

The visual performance has been optimized and technicalities such as gameplay has been rebalanced for current gen consoles. The pre-rendered models from the movie cutscenes of the original PSP game (exemplified by the image of Nine below) acted as a basis for the real time models in the HD version.

Tabata also talked about the new difficulty modes that will be implemented for the HD version. Japanese players apparently found the game hard and desired for an easy mode, and so the team decided to include it.

The multiplayer mode that the original game had has been omitted for the HD version as well.

“Originally, for the handheld device, when we introduced the multiplayer aspect, it was so that people could get together in the same environment and play together. But for the console, we thought it would impede on completing the game, so it’s not included in the game.”

In another interview with Siliconera, Tabata added that the option could slow down the game’s release, and that the feature’s removal does not have a considerable effect on the player’s experience of the story and universe. He also shared his thoughts on the influence behind the game’s world, and expressed his love for history. 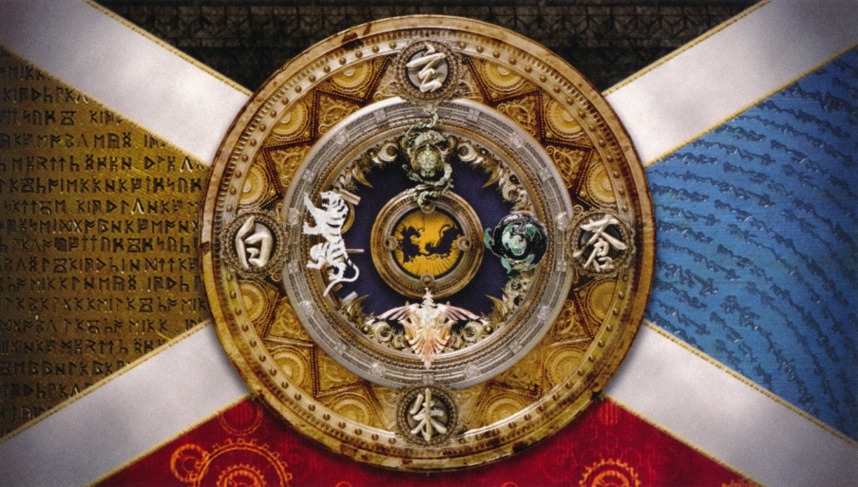 The flag of Orience, the world of Final Fantasy Type-0.

Hajime Tabata said that during the game’s initial writing, there was not much of the Fabula Nova Crystallis mythos in it. His first general idea was to write about warfare amongst nations and the life of a person living in such a situation. He also talked about his strong interest on history stemming from his childhood, and how that shaped the sort of historical documentary-esque structure of the game’s narrative. With the help of his writers, he was able to insert elements from the FNC mythos, and shape it up to something suitable for a Final Fantasy game.

He also explained the focus on rather young characters fighting in the story’s brutal war.

“There’s a famous Japanese historical drama that took inspiration from a war where not just adults were fighting, but children, too. Young soldiers that were thrown into the horrors of war, a tragic destiny. Watching the young soldiers really live through those kinds of times, I thought, there was some kind of beauty or inspiration to it.

I wanted to capture the young cadets’ feelings as they were tossed into a war. It’s a normal understanding that adults need to go to war, but there’s a different type of perspective that arises when you see these young people fighting through their confusion and making their own choices in intense moments. The fact that they’re not superheroes is very unique, even for Japan.”