Edea Lee Gets A New Look for Bravely Second 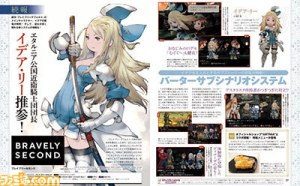 It’s only a few months until Bravely Second releases in Japan and we’re slowly getting the final details before it’s possible to dive in the world of Luxendarc again. The next issue of Weekly Famitsu features a new article about the game and introduces Edea Lee and her new look for the fans. Do you remember Edea? She was one of the main protagonists in Bravely Default. She was sent to capture the wind vestal Agnes Oblige, but she soon learned about the ruthless acts her group “Eternian Sky Knights” have committed and allies with Agnes in order to really understand the truth about this world and re-define her ideologies about justice.

Bravely Second takes place a few years after bringing peace to Luxendarc. Agnes Oblige has become the newly inaugurated Pope of the Crystal Orthodoxy and works to bring peace between Eternia and Crystal Orthodoxy. The dream of peace is soon shattered when she gets kidnapped by Emperor Oblivion – right before she was meant to participate in the peace treaty ceremony. The future which once seemed certain is now in danger. This is where Magnolia Arch, Yu Zeneorshia, Jean Engarde and Nikolai Nikolanikov step in! Now Edea Lee seems to be assisting the new heroes during their journey as well. More details will be available as soon as high quality scans are available online!