Square Enix has released a new Theatrhythm: Final Fantasy Curtain Call fankit including kawaii wallpapers, icons and screensavers. Obtain a screensaver for Windows XP/Vista/7/8 and Mac OS  X 10,4-10.8. by clicking these links. Below you can find all wallpapers and icons. Enjoy! HD WALLPAPERS  PHONE WALLPAPERS ICONS

Today, we are celebrating THE 20th ANNIVERSARY OF FINAL FANTASY VI! As unbelievable as it may sound, it truly becomes exactly TWENTY (20) YEARS since FINAL FANTASY VI was released for SNES in Japan! The co-director of the game, Yoshinori Kitase, surprise tweeted a birthday picture where he congratulated […]

Save Gils! Final Fantasy Games on the PlayStation Store until Feb 5! [EU]

It’s time to save gils because starting from today until February 5, Square Enix has slayed the price of Final Fantasy series by 50% on the PlayStation Store! If you are a PlayStation Plus member, you will receive get an extra 10% off! Here are all prices in […]

The phenomenal Final Fantasy classic is now out for Android devices! Debuting in 1994, Final Fantasy VI is still hailed to this day as one of the most remarkable RPGs in gaming’s history.  The graphics has been enhanced and the battle interface went through a complete overhaul in order […] 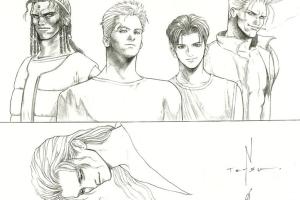 While cleaning around his room, scenario writer Aki Takashi tweeted old Nomura sketches he stumbled upon which dates back to Final Fantasy VI’s era. The images in the original tweet have been removed but you can view the sketches below thanks to FF-Reunion.

This year Square Enix is celebrating the 25th anniversary of Final Fantasy franchise. As part of the celebration they uploaded old Final Fantasy trailers to their official Youtube account. Check out all of them below! What is your favorite Final Fantasy game of the whole franchise? In addition trailers of […]