The World Ends With You

The World Ends With You -Solo Remix- Announced! The Release Tomorrow for iOS devices! 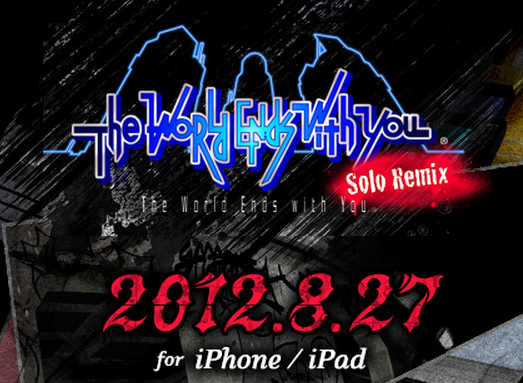 The teaser site timer has gone zero in Japan, and the new site announces The World Ends With You -Solo Remix- for iOS devices! The release of the game will happen on 27th August, 2012.

Story A boy named Neku wakes up in a crowded intersection of Shibuya in the heart of Tokyo – alone and unaware of how he got there. Then, he receives a text message: “Clear this mission…or face erasure.” With that, Neku is thrust into a life-or-death game that sends him scrambling down streets paved with one riddle after another.

Enjoy quick, satisfying and intuitive battles Activate combat abilities, or “psychs,” with simple touch commands like tapping, slashing, and dragging. Control Neku and his partner on the same screen and take the combat up a notch, and boost item drops in battle with the revamped Fusion system.

Redrawn art and HD display support Enjoy the game in full HD. Art and animation across the game has been redrawn for this release, making combat a beautiful experience.

The ultimate soundtrack: 60 songs Composer Takeharu Ishimoto’s complete soundtrack is included in the game with high-quality audio and full vocals, including remixes and new songs.

Profile sharing Exchange profiles with other players, and their avatars will appear in the streets of Shibuya! If friends have Twitter accounts, their avatar will think their latest tweet, and players can receive free items for every trade!

Deep replay value Finish the main story to unlock a bonus chapter, more quests and items to find, new combat challenges, and secret reports that further flesh out the story.

Explore a living, breathing city Neku’s sprawling world is based on the real-life Shibuya in Tokyo. Visit real locations and absorb some real Japanese culture through a hip fantasy lens.

Check out the new trailer below:

Categories: The World Ends With You

Tagged as: The World Ends With You -Solo Remix- Announced! The Release Tomorrow for iOS devices!