Isn’t your current wallpaper really your Type? Are you feeling a bit Zero? Well, it’s time to cheer up and get that “a new year, a new wallpaper” attitude rocking the house. Square Enix has released new Final Fantasy Type-0 HD character wallpapers and more are coming soon! […] 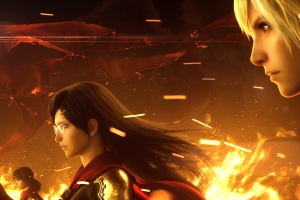 We’re happy to deliver you high quality Final Fantasy XV screenshots from the Jump Festa 2015 trailer. It took a while to capture and upload all of these, so we hope you enjoy them. The exclusive playable demo of Final Fantasy XV, titled FINAL FANTASY XV -EPISODE DUSCAE-, will […]

Square Enix has announced on the official website that the game is truly arriving for PlayStation 4 in May 2015 in Japan. The collection contains the same contents as the PS3/PSVita versions and the update doesn’t mention are there any update features. Expect more details shortly. The speculation […]

Greetings! This week has been all about surprises: at first our collaboration interview with the Final Fantasy XV / Type-0 director was finally published, Just Cause 3 got revealed, Square Enix released standalone 1080p videos of Final Fantasy XV and much more. Now it’s time for the last surprise this […]

Square Enix today released new Final Fantasy Type-0 HD screenshots that feature Ace and the rest of Class Zero attempting to defend their homeland with magic spells and summons. The screenshots are available here.  Square Enix also announced that the North American version of the game will include Japanese/English audio […]