The official website of Lightning Returns: Final Fantasy XIII Original Soundtrack Plus was updated during the weekend with the full Japanese tracklist and ten new samples including a few main character themes. You can read our translation for the songs below and listen to the new samples as […]

Lightning has been voted as the best character of 2013 at Dengeki PlayStation Awards! This was revealed on Lightning Room’s tweet where Motomu Toriyama and Yuji Abe are posing with the award and thanking all the fans who showed their support by voting Lightning! Congrats from Square Portal as […]

Lightning Returns Challenge #2 Completed! Here Is the Next One!

Great job people! We have posted enough Outerworld posts and thus unlocked a brand new garb for Lightning! The new garb is called Duelist which is a defensive garb that greatly increases the wearer’s maximum HP. To unlock the outfit you have to turn Outerworld Services on and find […] 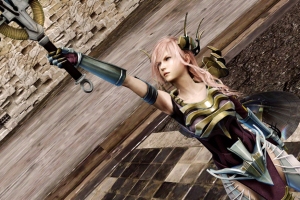 Lightning Returns: Final Fantasy XIII Original Soundtrack Plus is set to be released on 26th March. It will be containing music which was not included in the official soundtrack of the game. Take a look to the cover art below. Listen to samples here!

Acquire The Helter Skelter Garb In Lightning Returns: Final Fantasy XIII For Free, Unlock Another Garb In The Next Outerworld Challenge

Congratulations everyone! We’ve unlocked the Helter Skelter garb for free (which is very expensive in-game) through achieving the goal of making enough Outerworld posts for the first challenge. See it in action below (via Square Enix Europe): To acquire it in the game, make sure that you turn on your […]