When interviewed, Hajime Tabata revealed they were dealing with many issues during the “Final Fantasy Versus XIII” era, and unfortunately the timing never matched when they finally overcame an issue. Tabata joined the team in July 2012, and after that they have done major directional changes and moved the new-generation hardware. Before that the gameplay team, the cinematics team and the game engine team worked separately, but now they have been merged together to work on the game. The overall size of the development is up to 300 people.

Hajime Tabata and Tetsuya Nomura also had many discussions about the direction Final Fantasy XV is going to take. He wanted to ensure he completely understood Nomura’s original vision: “I wanted to make sure that characters, like Noctis, that are so important to Nomura, are maintained in the best possible way.” Though, it won’t be completely the same game as Final Fantasy Versus XIII because the new-generation hardware allows them to do more than before.

Final Fantasy XV will feature a dynamic weather system. This means that the weather will change naturally and the environment and objects will react to the conditions accordingly. For example, when it is raining, the characters will get wet and puddles will appear on the ground. When it’s shining, the ground and the characters’ clothes will be dried by the sun.

In addition, the weather will impact to Noctis‘ magic abilities. During the sunny days, fire magic will deal more damage and may even cause burning to the environment. At the worst scenario, Noctis himself will get hurt by his own magic attacks, if they are used in the wrong conditions. Perhaps using his lightning abilities while it’s raining won’t be a good idea!

The day-night cycle system was first revealed during “The Overture” presentation. One day in the game equals to 30 minutes in the real world, and the player can see the lighting and the shadows dynamically changing as the day goes on. The towns will be reacting to the night as well, and people will turn their home’s lighting on when it’s getting dark.

Tabata also revealed it will take 30 days to beat that huge Adamantoise which was shown in the trailer last week. That would mean about fifteen hours in real time! Quite a super boss! (If Tabata wasn’t just teasing us!) Just watch out you don’t get hit by Adamantoise’s foot!

See the key art above? It’s not a promotional artwork, but an introduction to one of the main mechanics in Final Fantasy XV. After a rough day of fighting the monsters and trying to fulfill your duties, it’s good to get some rest. You can camp outside or spend a nice evening in a hotel in the city. This is quite a crucial element in the game, because without sleep the characters eventually become weaker and aren’t performing as well as before during the battles. Some powerful monsters come out during the nights as well, and you might not be able to beat them until you have grown strong enough.

The development team wants Final Fantasy XV to feel like a road trip movie, and an experience which the players only get from the best open world games. It’s a seamless journey with the boys driving their car around the world. The game seems very realistic but it’s still a Final Fantasy game from the core.

The world is completely explorable, but they won’t just throw the player in the middle of nowhere and expect him to search random quests in order to do some story progression. Instead of that, they are creating clear objectives to drive the story forwards and making it a satisfying experience for those who are looking for the traditional Final Fantasy storytelling. At the same time, they are letting the players feel the freedom and do and explore as much as they want.

Final Fantasy XV also features optional dungeons where the players can challenge the most powerful monsters but also find the best weapons and equipment. Final Fantasy XV: Episode Duscae will be featuring one of these dungeons. According to Tabata, the car won’t be just “a car”. The players can consider it more as a party member than a transportation vehicle. He jokes that it will be “the airship” of Final Fantasy XV. The car is also a symbol that represents the open world and the freedom in the game.

The driving itself is designed to be enjoyable and fun yet realistic – but not too realistic. The car can be set to a manual or an auto mode, and while the player is driving, he can listen to the characters’ conversations. Since the world will be huge, Tabata recommends the players to travel by car. The objectives may be far away from each other, and if the player chooses to walk to the destination, it will be taking a long time. Walking is primary for getting to places where you can’t get with the car. 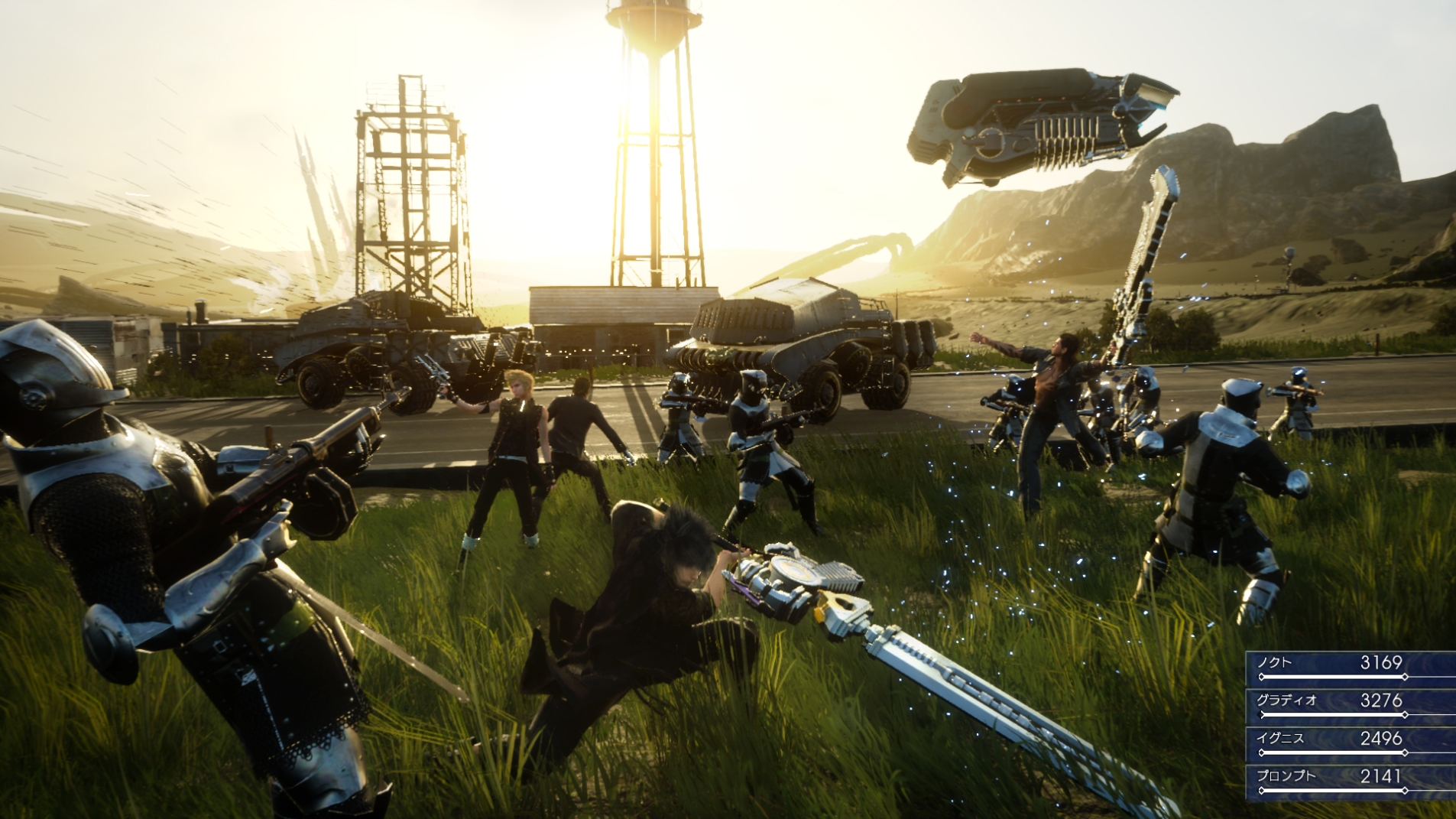 There’s still much we don’t know about Final Fantasy XV’s battle system, but here’s everything Tabata revealed during the interviews. First and foremost, he wants the gameplay to be fun and feel great. The basic idea is to build the battles upon a continuous flow of movements; this continuous flow is based on the combination of buttons you press and each action is chained into another in a seamless way. There will be two stances: defensive and offensive. During the defensive stance, Noctis evades and guards most of the enemies’ attacks. The fighting itself happens during the offensive stance.

Unlike in any other mainline Final Fantasy game, there won’t be a separated menu for the commands. You will be controlling other characters by adjusting their battle style and strategies from the menu. Cooperation between the characters is an important element in Final Fantasy XV. It will be executed automatically, but certain abilities, equipment and weapons may encourage the characters to cooperate more likely when the circumstances are right. Previously, we saw Noctis and Ignis also performing a linking attack in “The Overture” tech demo. It’s just one form of cooperation.

Noctis is a weapon summoner and he has an ability to teleport to a new place by throwing one of his swords there. The player can only teleport to certain locations and depending on the circumstances, you will see a glowing icon where you can teleport.

Note: These are just small details about the battle system. There’s still a lot more we need to know before even trying to understand how it works. More details will be coming later this year. During the interview, Tabata was proud to reveal that everything in the Tokyo Game Show trailer was in-game engine, except the part with airships. (see the picture above) The director told he wanted to create a seamless experience where transitions between the gameplay and the cutscenes are fluent. The graphics are currently at around 70% of their goal, and he hopes to improve the graphical quality when the demo is released next year.

Hajime Tabata also answered a question about bringing old Final Fantasy elements to Final Fantasy XV. He feels that adding some features / elements to just please the fans, is a very shallow action, and necessarily won’t make the game any better. Final Fantasy XV will contain traditional elements such as chocobos as long as they fit to the overall vision and have some meaning in the game. Though, he promised there will be a surprise for the fans at the end of Final Fantasy XV: Episode Duscae.

The game will obviously support the new-generation consoles’ features such as sharing, but the remote play function on PlayStation 4 is undecided. With the remote play, the players can play their PlayStation 4 games on PSVita anywhere they want as long as their internet connection is fast enough. The feature won’t be in the demo, but it might be added to the final version of the game. Tabata is well aware of the risks that come with the demo release, but he is ready to take them in order to make Final Fantasy XV the best experience as possible. They also wanted to avoid releasing two Final Fantasy games (FFXV & FFTYPE-0) as standalone titles since they would have damaged each others’ sales. This is why they decided to release them in a single package and make the games live in a symbiosis together.

Episode Duscae will be included in every Final Fantasy Type-0 HD copy and is named after one of the areas in Final Fantasy XV. The demo will focus on the battle system and exploring the areas such as the dungeon and a city. It will still provide an hour-long experience for the players who only want to experience the story, but it may take up to three or fours hours to explore everything. The Tokyo Game Show trailer was also the demo trailer and all the locations showed in it will be in the demo.

Now that all problems have been overcome and the development has truly started, Final Fantasy XV seems to be on the right track. This is why Hajime Tabata hopes the fans would restart counting the development time from the time when he joined in the team. (July 2012) In terms of development, Final Fantasy XV is 55 percent complete now and it’s not after eight years. It’s only two years worth of work. Let’s hope everything goes well, and that we will be playing the full version of the game within a year or two!

This article was built by Square Portal. All the information is based on interviews by Famitsu, 4Gamer, Dengeki, Gameinformer and Kotaku.